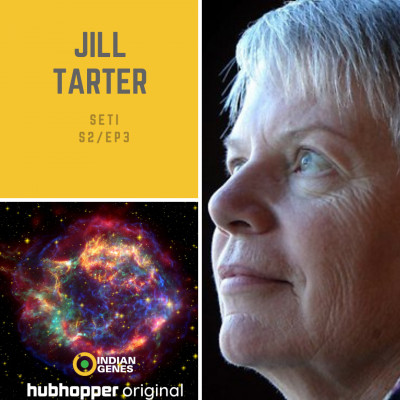 S2/EP3 – Jill Cornell Tarter is an American astronomer best known for her work on the search for extraterrestrial intelligence (SETI).

Tarter’s astronomical work is illustrated in Carl Sagan’s novel Contact. In the film version of Contact, the protagonist Ellie Arroway is played by Jodie Foster. Tarter conversed with the actress for months before and during filming, and Arroway was “largely based” on Tarter’s work. She has also been featured in John Boswell’s Symphony of Science music video, “The Poetry of Reality (An Anthem for Science)

Tarter is the former director of the Center for SETI Research, holding the Bernard M. Oliver Chair for SETI at the SETI Institute. In 2002, Discover magazine recognized her as one of the 50 most important women in science.

Tarter has worked on a number of major scientific projects, most relating to the search for extraterrestrial life. As a graduate student, she was inspired to do SETI research by the Cyclops Report. Stuart Bowyer gave her the report to read when Bowyer discovered that Tarter could program the then-outdated PDP-8/S computer that had been donated by Jack Welch for Bowyer’s SETI project at Hat Creek Radio Observatory. She worked with Bowyer on the radio-search project SERENDIP and created the corresponding backronym, “Search for Extraterrestrial Radio Emissions from Nearby Developed Intelligent Populations”. She was project scientist for NASA’s High Resolution Microwave Survey (HRMS) in 1992 and 1993 and subsequently director of Project Phoenix (HRMS reconfigured) under the auspices of the SETI Institute. She was co-creator with Margaret Turnbull of the HabCat in 2002, a principal component of Project Phoenix. Tarter has published dozens of technical papers and lectures extensively both on the search for extraterrestrial intelligence and the need for proper science education. She had spent 35 years in the quest for extraterrestrial life when she announced her retirement in 2012